Reliance Jio is a LTE mobile network operator in India that provides wireless 4G LTE service network and it provides only ‘VoLTE’ (Voice over LTE). Reliance Jio is creating the most expansive future-proof network in India.

India is the world’s second largest population of 1.2 billion and young nation with 63% of its population under the age of 35 years. It has fast growing digital audience with 800 million mobile connections and over 200 million internet users. So Reliance Jio will create a digital revolution in India.

Reliance Jio will provide next generation digital services over end-to-end IP network which can be seamlessly upgraded even to 5G and beyond. In addition to the existing pan India 2300 MHz spectrum and 1800 MHz in 14 circles, Jio invested over rupees 10,000 crore during this year Jio owns spectrum is 850 MHz bands in ten circles and 1,800 MHz bands in six circles and The spectrum is valid till 2035. This brings the cumulative investment in spectrum assets to nearly rupees 34,000 crores. Now the Jio has largest footprint of liberalized spectrum in the country, acquired in an extremely cost effective manner. Now at the time Reliance Executive says out of 60 billion rupees of debt, 50 percent is long term foreign loan which can be served via operating income. 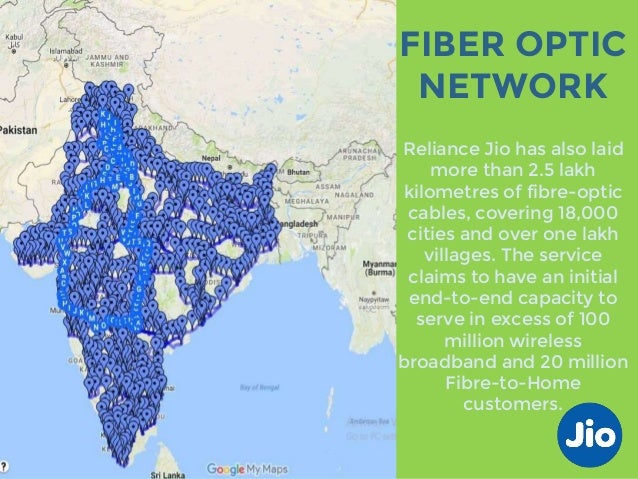 Reliance Jio has laid more than 2,50,000 kilometers of fibre-optic cables, covering 18,000 cities and over one lakh villages, with the aim of covering 100% of the nation’s population by 2018. It has an initial end-to-end capacity to serve in excess of 100 million wireless broadband and 20 million Fibre-to-Home customers. Reliance Jio has also built nearly half-a-million square feet of cloud data centers and a multi-Terabit capacity international network.

Reliance Jio aims to enable this transformation by creating not just a cutting-edge voice and broadband network, but also a powerful ecosystem on which a range of rich digital services will be enabled a unique green-field opportunity.